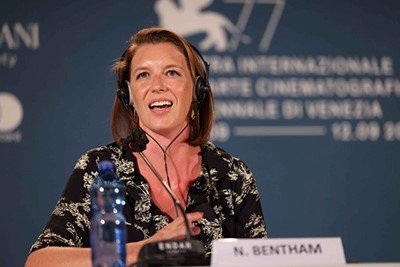 As the industry tries to ride out the COVID crisis, we ask Pact members some serious – and some not so serious – questions about their approach to their work and productions.

This week: Nicky Bentham: founder and producer at London based Neon Films.

I’m really hopeful that the last year has highlighted the need for and benefits of an open and evolving sector.

Neon’s most recent film, The Duke, stars Jim Broadbent and Helen Mirren and was directed by Roger Michell. It premiered at the Venice Film Festival in 2020 to five star reviews and will be released later this year by Pathe and Sony Pictures Classics. Nicky also recently completed post on the feature documentary Who Killed the KLF? A co-production with Fulwell 73, also set for a 2021 release.

Between 2012 and 2015 Nicky acted as Executive Producer on the BFI’s short film scheme, delivering 17 films that went on to gain accolades at Cannes, the BIFAs and BAFTAs. She is an active member of BAFTA and WFTV and is one of the founders of Raising Films.

Nicky is currently serving her second term on Pact Council and is the Co-Chair of Pact’s Film Policy Group.

I get a lot of energy and inspiration from the randomness of life – things you might see or overhear, unexpected encounters, ideas from other cultural experiences.

In a word, how are you feeling about 2021: Sanguine

What has been the biggest challenge of running your business during the COVID pandemic and how have you tried to overcome it?
My last production, The Duke, premiered in Venice in September and was received really warmly by audiences and critics (it was also selected for Telluride but that was cancelled, sadly). Normally that sort of platform would present fantastic opportunities for networking and setting up future projects and collaborations. I’ve managed to do some of that on zoom but it’s not quite the same.

Also, in development and the creative side of my work, I get a lot of energy and inspiration from the randomness of life – things you might see or overhear, unexpected encounters, ideas from other cultural experiences etc. There’s been none of that, at least not in a communal way, and I think it’s been quite challenging making creative connections from a place of introspection. It has forced a different kind of focus and garnered more reading and researching time, so that’s not a bad thing.

What film, TV programme or series has most inspired or entertained you in the past 12 months (and why)?
Hands down PEN15 has been the most entertaining thing I’ve watched. Amazing writing and acting. So well observed and perfectly executed, it’s hilarious and heart-warming. It’s been a tonic for me and I can’t wait for series 2.

Predictably, I’m expecting that zoom/teams/hangout etc. is here to stay and that’s great in terms of broadening access.

What’s your worst professional habit?
Not filing my emails. I’m getting better.

What is your social media platform of choice, and what does that tell us about you?
Facebook – which I think tells you that I’m officially getting old! I mostly use it as a tool to keep up to date with friends and family around the world (I’m from Australia) and I do like the potted news and occasional feelgood stories it offers.

What one thing about the industry are you most looking forward to returning once we’re over the worst of the COVID crisis? And what are you not looking forward to coming back?
Going to the cinema. I really indulged in the screenings at the BFI London Film Festival in October and it was so nice to have a week of big screen, communal viewing again.
To be honest there’s nothing I’m not looking forward to! Don’t get me wrong, there’s loads about the industry that needs to improve, but I’m really hopeful that the last year has highlighted the need for and benefits of an open and evolving sector. I’m one of the founders of Raising Films, a campaign and a community for parents and carers in the screen industries. We’ve long been making the case for more accessible, inclusive, flexible, compassionate hiring and working practices. Every production can’t do everything, for everyone, all the time, but there’s always something we can be doing to make the work place more productive and more welcoming to different people and voices. I’m optimistic that through the challenges of the last year, we’ve all learnt a lot.

What long-term changes to the way you run your teams and your business do you expect to last beyond COVID
Predictably, I’m expecting that zoom/teams/hangout etc. is here to stay and that’s great in terms of broadening access.

If you could change one thing about the industry, what would it be?
Greater and broader diversity in senior decision-maker and gatekeeper roles.

Who is your creative hero?
Rebecca O’Brien (Sixteen Films). She’s had commercial and critical success on so many incredible films, with amazing talent telling powerful stories. She does her job formidably, but with a lot of heart and good humour.

Pact would like to thank Nicky for taking part in our interview series.